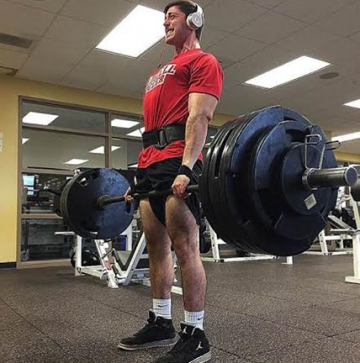 Austin DeAngelis, 21, training at his college's public gym. Austin maintains a full course-load, works a part-time job, and finds time to dedicate toward his fitness goals.

With rigorous discipline, Austin DeAngelis will be entering his second NPC (National Physique Committee) Men’s Physique Competition on April 30th. The competition is an amateur league to the IFBB Professional League, featuring the world’s top athletes.

Intense training, while maintaining a strict diet, is what has helped carry DeAngelis through his months of preparation. However, he notes that something else is fueling his athletic drive. He is passionate about what he does, but his motivation comes from deep within, he says.

As a young teen, DeAngelis became a primary caretaker for his ailing father. His two older brothers were busy in school or at work, leaving DeAngelis with much more responsibility than a 14 year-old could have foreseen. Many sons his age spent their days practicing sports or watching television with their fathers. However, he spent everyday with his father like it was his last. “It was a very awkward situation, a very painful situation,” DeAngelis says.

Anthony “Tony” DeAngelis was diagnosed with pancreatic cancer after an emergency room visit on New Years Eve of 2008. “The holidays don’t even bring that much happiness to me anymore, it just brings up pain,” Austin says. A loving husband and father of three, as described by his son, Anthony was told by doctors he only had a few more months to spend with his family. Austin’s father couldn’t eat or sleep, and was deteriorating quickly.

Anthony was able to fight his battle for a year and a half.  “He had a family, and he loved us, and he wanted to fight it as long as possible,” DeAngelis says.

DeAngelis's mother now carried the weight of two parents raising three boys, somewhat derailed from life’s path. DeAngelis's brothers went off to work in order to make ends meet, leaving him alone a lot. Everyone had readjusted their roles within the family accordingly, while DeAngelis was still trying to figure his out.

DeAngelis says that feelings of depression, sleeplessness and anger overwhelmed him. Even after the gentle suggestion from his mother, he refused to seek professional help. DeAngelis was the youngest of three brothers, wandering aimlessly into manhood at the age of 14.

DeAngelis signed up for a gym near his house in New Jersey and walked there each day after school. “Even though I had no idea what I was doing, it just felt good to throw around weight and kind of, it was just letting out anger, ” he explained.

This escape soon became a therapy session, and from there transcended into a passion. His body transformed, giving him confidence in himself he had not had for a while. “Getting compliments from other people like ‘Oh, Austin you’re looking bigger’, was the greatest thing,” he says.

DeAngelis competed in his first NPC show in June of 2015. After a few short months off, he found himself back in the momentum of training toward his next. Although his father won’t be present to see the turnout, “He made me the man I am today,” DeAngelis says.

Video: The Man I Am Today

Austin DeAngelis says he gives full credit to both of his parents to making him the man he is today. Despite his father’s sudden death, DeAngelis believes he was still able to learn a valuable lesson from his childhood role model. “I’ll never forget it, at the wake and funeral for him, the line was out the door. We actually had to extend his session because that’s how many people he affected. That’s when I understood that the most valuable currency you can have in life isn’t money, isn’t success—it’s how you affect other people and the impact you have on other people’s lives,” DeAngelis says.

DeAngelis says he also credits his mother, Diane, for her ability to take on the role as both parents. He explains that she carried much of the weight following his father’s death and, for that, he will be forever thankful.

Janae is a broadcast journalism and psychology dual major with a passion for connecting with her audience. She is a former PR intern for “O, The Oprah Magazine” and entertainment host for Penn State’s “Hollywood Now”. After graduating in May 2016, Janae hopes to take her communication skills and intimate level of understanding for others to the professional world as a powerful and moving storyteller.