Boxing Out Of His Comfort Zone

Some people are risk takers. Others aren’t. When Marquise Craig left his hometown to attend Penn State, he was ready for the challenges that lay ahead.

“Coming from a really minority-oriented area to a predominantly white area is the biggest transition,” Craig, a Baltimore, Maryland native said. “It makes you feel like you’re a small part of a bigger world.”

In order to fully thrive in a new and unfamiliar environment, Craig said he decided to step out of his comfort zone and try something new. So about a year and a half ago, he started boxing.

"It started off as just a little hobby, just to get in shape," Craig said. "The more I did it, the more people told me I should actually try out [for the boxing team]." 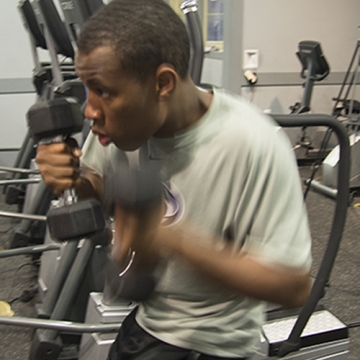 Marquise Craig, 21, is 5-2 in his career as a Penn State boxer. With no fights left in the 2015-16 school year, Craig is preparing himself to go the distance next school year. Photo by Alex Passaretti

He doesn't just spar and hit the bags; he puts in a lot of work that some people will never see. He goes to the gym twice a day, even when he has practice. He also runs three miles after lifting weights for an hour.

Craig fights in the 145-pound weight class, which means he needs to work hard to maintain his weight. If he gains any weight at all, he has to move up a class and fight opponents 10 to 15 pounds heavier than him.

Despite the challenges he faces, Craig always maintains a positive outlook on life.

"My biggest inspiration is definitely God and my family,” he said. "It's what keeps me moving every day, keeps me running, keeps me striving to push forward."

Craig is on course to graduate next year. He will continue training and boxing until then because next year, he says he wants to win a championship.

"I don't want no losses. That's always my expectation."

Craig said life is very different in State College than his experience growing up in Baltimore.


No More Burgers At Penn State

Craig said the biggest challenge he faces while training is eating right.

So cut out the burgers and grease; bring on the salads and vegetables.

In addition to being a Penn State student, Alexander also contributes sports, music and news articles to Slant News, Inc. as a staff writer. He hosted New York Sports Connection and co-hosted NJ Bias for two years. Alexander hopes to one day pursue a career as a sports broadcaster.