It’s difficult for Jackie Stare to think of a future without twirling.  Since she was six years old, she’s been competitively twirling batons.  Performing individually and with different teams, she has logged countless hours on the gym floor, perfecting her craft.

Twirling led Stare to three different countries and a team world championship. It also led her to Penn State, where she joined the Blue Band's "Touch of Blue" majorettes, performing on the field at Beaver Stadium. 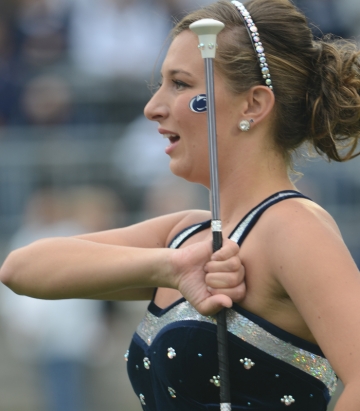 But now, with her collegiate career coming to an end and her post-graduation plans coming into focus, Stare is at a crossroads.

“Going through my final game as a senior was the worst thing ever,” Stare recalled. “I would like to think that maybe I’ll get some sort of opportunity to perform before I really hang up my hat and say that my career is over.”

Stare, a senior public relations major, is focusing her attention now towards preparing the younger majorettes for next football season.

“I’m doing a lot of mentoring and giving back to the girls who are going to be in leadership roles for next year’s team," Stare said. "Really making sure that they are prepared to take those roles on, and getting ready to help them put a team of ten to fourteen girls on a field in front of 110,000 people every week.”

Stare also gives private lessons to younger twirlers in the area who aspire to come to Penn State and join the “Touch of Blue.” She preaches repetition, focus, and confidence to her students.

“In order to be really great at our sport, you have to be constantly improving. The only way you can do that is by practicing,” said Stare.

Though Stare’s work ethic is evident, she didn’t always have the same dedication to twirling. In fact, her career only began after her mom signed her up at the age of six, to her displeasure.

“I hated every single second of it," Stare said, smiling. "I would make up injuries every practice so I could sit on the gymnastics mats that were on the side of the gym and just not practice.”

In her second year, Stare finally began to enjoy the sport when she started competing individually. At age thirteen, she joined a more competitive team and was practicing four to five days a week at a gym an hour and a half away from her home.

Though the time commitment was a burden, Stare said it was well worth it.  Her Wheaton (Md.) Twirl Team won a world championship, she got to travel to other countries for competitions, and it led her to become a Nittany Lion.

“Making that career move to a different team was the best decision I’ve ever made, besides coming to Penn State," she said.

Performing at football games was a highlight for Stare, and is one of the things she’s going to miss most about her college career.

“I really enjoy twirling on the field in Beaver Stadium in front of 110,000 people because I get to do what I love for the school that I love, and being able to combine both those things has really made my Penn State experience amazing."

After 16 years of learning, competing, and performing, now it's Stare's turn to give back. Here, she shows how to complete a fundamental twirling skill: the thumb flip.

I am a senior Broadcast Journalism major at Penn State University planning to graduate in May 2013. I am pursuing a career as a television producer in sports or news. I have interned with Comcast SportsNet Mid-Atlantic in Bethesda, Maryland and the sports department at NBC 4 WRC-TV in Washington, D.C. In my senior year at Penn State, I was a producer and reporter for the Centre County Report, a weekly student newscast aired to 29 counties in Pennsylvania. Prior to that, I was a reporter, videographer, and anchor at PSN-TV, a student-run television station. In addition, I produced Penn State Sports Night, a bi-weekly sports talk show. I am skilled with HD cameras, Final Cut Pro, iNews, ENPS, Pro Tools, and Hindenburg. You can follow me on Twitter at @ericjfeinstein.