In a sport dominate by men, Brigh Desjardins is fighting to stand out. Desjardins has been playing golf for as long as she can remember. Her grandfather taught her dad and her dad taught her, it was a bonding experience for them that has kept them close. Since learning to play the game, Desjardins has had the opportunity to play at Pinehurst with her two siblings who  share the same love for the sport that she does. 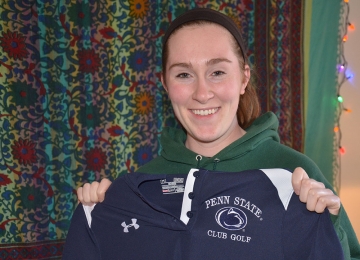 Brigh holds up the shirt she designed for the Penn State Club Golf team. Photo by Katie Pearcce

Desjardins is a junior at Penn State majoring in actuarial science. She comes from Malvern Pennsylvania and attended the Academy of Notre Dame. Coming from an all girls school the transition from an all girls team to Penn State’s predominately male club golf team was intimidating. Desjardins has gone from being a freshman, unsure if she was allowed to play with the boys, to a strong player who now holds a leadership position. As fundraising and merchandise chair of the club golf team Desjardins is in charge of organizing fundraisers and creating clothing for the team.

When Brigh is off the course she enjoys going for runs, hanging out with friends and exploring the restaurant scene in State College. Not only is she involved in club golf, she participates in catholic campus ministry and is on the executive board of the actuarial science club.

On the course she keeps up with the boys shooting low 80s and boasting an impressive personal best of 75.

Video: Your name is WHAT?

With a name like Brigh Desjardins you are bound to get some questions and quite a few interesting guesses on how to pronounce it. Brigh has been correcting people on how to say her name her whole life but there is a reason behind the interesting spelling.

Brigh’s father stayed with a host family in Ireland years ago. The family had a young daughter named Brigid who went by Brigh for short. Her father thought that his host sister was one of the sweetest children he had ever met so when it came time for him to have his own children, his wife and him agreed that naming their first girl Brigh was the only choice.

I am a senior broadcast journalism student at Penn State University. I am passionate about television production and the development aspect of the media industry. I have had a variety of experience within the broadcast news field including internships at Seacrest Studios and Penn State Athletics. I am involved with Penn State’s Network Television and am the associate producer of “The Valley” a sketch comedy show that airs on Penn State’s network television.