Being hit by a drunk driver, having malignant cancer and getting struck by lightening are all enough to kill a person. Imagine having all three happen to you. Add more than 20 surgeries and a basketball hoop falling down and hitting the back of your head. Coach Mike Morse survived this all.

“I look at it and say, ‘Hey, I’m still here. I’m still coming in to a place that I can teach at and feel like I am making a difference.’ It’s incredible. I’m lucky and I feel grateful for it everyday,” Morse said.

None of his ailments or near death experiences have kept him from doing what he loves: teaching and coaching. What he enjoys about both is being able to make a difference and influence students to overcome their fears and achieve their goals. “I like the fact that most of the kids are there voluntarily and they are really hungry to take whatever you have to give them. You can impact lives. There is nothing like working with kids toward a common goal and having them achieve more than they thought they could,” he said.

Morse got his first job as a basketball coach while he was still a student at Penn State in 1975. He coached the Penns Valley High School girls' basketball team. After graduating, he coached at high schools all over the northeast. In 1986, he returned to Penn State as an assistant coach for the men’s team. He turned down the opportunity to be the head coach at the Merchant Marine Academy to spend more time with his wife and two children. Every now and then he thinks about what could have been. “You’d be a nut not to wonder,” Morse said. However, he does not regret it. 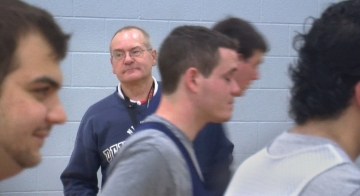 He teaches basketball and fitness walking at Penn State but his students get more out of his classes than the principles of basketball and fitness. He enjoys telling his students stories from his personal life about pain, perseverance, strength and greatness. His fitness walking classes usually start or end with a story. One day, he decided to speak about the lightening strike and how the aftermath affected his life.

“I’ve never seen a storm like it before or since. There were lightening bolts every seven to ten seconds. The thunder shook your whole innards. I thought, ‘My God, we survived the first strike we’re going to get hit ten more times.' It was hell,” Morse said.

He was on a camping trip with his son, his best friend and his best friend’s son. A fierce storm came in one night and lightening struck the tent they were all sleeping in. It raised the tent six feet off the ground.

“It happened in slow motion, like my mind was outside myself,” Morse said.

He describes the feeling like testing your blood pressure. “They get near the end and they squeeze it a time or two and it’s pretty tight. And you’re thinking ‘I hope they let go of that soon’ and they always do. But imagine doing that and you have a cuff on your whole body and when they get to that point, they don’t let the air out. They squeeze five to ten more times. It felt like my whole body was going to pop,” Morse said.

Morse could not move his left side. His son, Willie, lay dying next to him, and there was nothing he could do but pray and wait. Morse said, “The sights and sounds were horrific. My son was thrashing with convulsions. My best friend’s legs went black.” Rescuers came nine hours later when the storm subsided. Everyone survived, but the strike left lasting effects.

Aside from the physical issues, Morse’s mood began to change. He became irritable and lost interest in the things he loved to do. After much coaxing from his family, he finally went to a therapist. While in therapy sessions, he realized that his depression was stemming from blaming himself for his son’s near death. Once he recognized this, he was able to overcome the problem. The lesson in this story: be wary of physical and mental changes and do not be too proud to ask for help.

Morse truly cares about his students and players and still keeps in contact with many of them. One of his basketball students had to take the semester off because he got cancer. Morse has his class video chat with the student to help keep his spirits up and let him know that they are thinking of him.

One of the most touching and inspiring moments of his career happened when two female, Muslim students in his fitness walking class, who had not spoken all semester, asked him for a picture on the last day of class. He was careful not to touch them, but they insisted that he put his arms around them. For Morse, this type of thing is what keeps him here now that he is eligible for retirement.

All his experiences have allowed him to not worry about things that are not a matter of life and death. “When you lay there looking at your son who is absolutely totally immobile and not breathing, that vision never leaves you. No matter what, I will carry that with me till I die,” Morse said. “And so I appreciate every day more than the average person because you realize how finite and fragile life really is. It’s amazing.”

Morse had extensive medical issues stemming from the lightning strike. He still battles them today.

Juliet A. Smith is a student at the Pennsylvania State University. She is a double major in Broadcast Journalism and Supply Chain & Information Systems. She is also minoring in International Business. She is interested in working as a producer or reporter for a broadcast news program.

Francis Ngo: Living by the sword