People use words like lazy, unsuccessful, and even stupid to stereotype a “college dropout”. 22-year-old Chance Pini, who dropped out of school two and a half years ago, is now running his own contracting company.

After attending Penn State Berks for one year in pursuit of becoming a suit-and-tie businessman, Pini’s grades made him realize college wasn't for him. He says he had no plans and no direction to what he wanted to do for the rest of his life.

Although he wasn't a success in the classroom, it turns out that he learned a lot from his father, Chris Pini. After school, Chance climbed up the ladder rapidly. 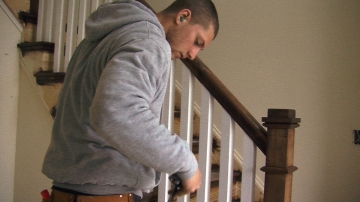 Pini says he never intended to follow in his father’s footsteps, however, he always loved visiting him at work when he was younger. He began learning the building process by first sweeping the floors. After that he learned how to install window sills which greatly enhanced his knowledge of how intricate the process of building a home is. He then learned how to put toigehter and hang a door. "It takes a while to get down," he says, "If you just throw it together, people complain." Pini says on average there are about 30 doors that need to be hung in each house!

Pini's next big step was learning how to do railings, which he says is one of the most important skills a finish carpenter should know how to do, “If you don’t know how to build railings, you’re pretty much out of a job.”

While Pini’s main skill is finish carpentry, otherwise known as the interior stuff, he says knowing rough carpentry such as framing is also important. Framing is less detail oriented because it will most likely get covered by dry wall.

Working outside is phyiscally demanding. “I know some guys who can’t even walk down the steps anymore because their bodies are so destroyed,” he said. Pini has learned more than carpenty. He has also learned how to run a buisiness.


Being self-employed means that bills and taxes are more substantial on his shoulders in his line of work. “If I just take everything I make right away, I’ll only be in business for a little while,” he says, “More importantly than knowing how to do the actual work is knowing how to handle money and finance too. It’s not like I get a check written to me and I can deposit it and that’s it."

Pini says while it can all get tiring and sometimes repetitive, framing is his favorite thing to do right now. As an active person, he enjoys using his full body working rather than sitting down and concentrating on one small thing. He hopes he can continue doing so for a long career.


Chris Pini is the co-founder of C&F contracting based out of Lititz, Pa. Although he was disappointed when Chance was first kicked out of school, he is extremely proud of his son for working so hard and making it so far in such a short amount of time.

Hello! Although I have numerous interests and love learning new things, my main focus is to be in Entertainment News. I love all aspects of broadcast including on camera, writing, and editing.