Chen, who went to the United States in the early ‘80s to attend the Phillips Exeter Academy and then back to China after he completed his graduate education, had a vision for the future of Chinese universities. He recognized that burgeoning cities like Shanghai could not sustain workers who had gone to school on the “assembly line.”

“From the get-go, it’s all about getting the right answer,” Chen said of China’s strictly regimented, test-oriented education system. “And many times if there are multiple right answers, then what’s the right one? Well, it’s the teacher’s answer. Chinese schools, they train you that way.”

So Xing Wei College was born. The liberal arts style college, a private three-year school, has discussion-based classes taught entirely in English by American professors. It opened its doors this fall to 30 students. It had just 25 in the spring semester.

That number is minuscule in a country where more than 6 million college students graduated in 2012. But the idea of a well-rounded university experience is becoming increasingly popular in China, especially among those who have already sampled Western-style education. 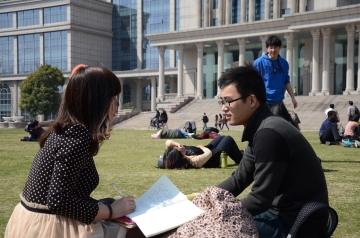 One such student, Lu Jie, attended primary school in New Zealand. When she returned to China to attend high school, she was overwhelmed.

“In China, you have heaps of textbooks and heaps of knowledge you have to cram into your head,” said Lu, an undergraduate at Shanghai International Studies University. “In New Zealand, we could make projects and write essays and give presentations. But in China, it’s just homework, homework, homework.”

Xing Wei is just one of many examples of efforts being made to rebalance this and expose students to a Western-style liberal arts education. Among others:

·      United International College opened in 2005 in Zhuhai. It is China’s first independent liberal arts college. It seeks to promote “liberal arts education by tapping into both classical Chinese and Western cultural traditions,” according to its mission statement.

·      A New York University portal campus is set to open in Shanghai in fall of 2013. At least half of the inaugural class will be Chinese students and the rest will be international, said admissions officer Chanel Liu.

·      Among China’s older universities, Fudan University in Shanghai, one of the country’s most selective, was the first to incorporate general education requirements into its curriculum more than 10 years ago. The university has a policy that requires students to take courses outside of their major during every year of their undergraduate career, said Xiong Qingnian, the director of the Research Institute for Higher Education at Fudan.

“We want our students to have more varied views on society,” Xiong said. “That is why Fudan wants to focus on the liberal arts.”

Chen’s plans for Xing Wei are more radical than simply offering students a taste of the liberal arts. He has done away with the dreaded gaokao — China’s all-important entrance exam that determines where students will go to college and what they will study — as a requirement for admittance. And Xing Wei students are not required to choose a major.

“We have the opportunity to not just copy what liberal arts education is in the States, but to see how we can do it differently, do it better, to better prepare the students,” Chen said.

But the success of Chen’s college of the future is by no means certain. For one thing, Fudan’s Xiong says that while there is much excitement for NYU Shanghai, he has never heard of Xing Wei, even though both colleges are located in the same city.

And since Xing Wei does not require the gaokao exam, the government cannot accredit it as a four-year institution.

“In order for the government to grant us accreditation they will have to reform the current education system guidelines and college entrance requirements,” Chen said.

Moreover, Xing Wei will have difficulty finding mass appeal in China’s credential-driven, traditional society, said Yong Zhao, who is the associate dean for Global and Online Education at the University of Oregon.

“In China, higher education is a major investment. Unlike in America, it’s one shot. You’re not supposed to waste your time,” Zhao said.

Still, there are at least some students who are passionate about the idea of trying something new.

Despite opposition from his parents, Wang Bing was one of three students from Hefei University of Technology chosen to spend two years at Xing Wei before he will transfer back to his university.

“We have a freedom here to learn new things. In a traditional Chinese college, teachers do not give you that freedom,” said Wang, who is called “Rick” by his peers and professors at school. “I came here because there was a new life waiting for me.”

So what has spurred China’s interest in the liberal arts?

One main driver of the education reform has been China’s emergence in the world economy, said Lauren Zletz who conducted her Harvard undergraduate thesis research at Fudan four years ago. Historically, education in China was used as a way of maintaining order, Zletz said.

“People majored in very, very specific things, because it’s a lot easier to allocate people to specific roles in a state-planned economy,” Zletz said. “This influenced education toward a more technical training ground.”

But as China competes globally and moves toward a more knowledge-based economy, reformers realize the education system must change as well.

“You can’t just memorize information to be successful in a global economy,” Zletz said. “You need to be evaluative, creative, a problem solver.”

Fudan University’s Xiong said there is certainly a “mismatch” between secondary and higher education. From a young age, Chinese students are divided into tracks and they usually follow that track into college, rather than learning a variety of subjects.

“At the university, we want students to learn widely,” Xiong said, in comparison to secondary schools. “So maybe liberal arts in college can remedy some of the issues of high school education.”

For Liu Meiyue, a Fudan graduate student studying to become a teacher, college offered a place where she could finally pursue her own interests.

scores. We have no time to think about ourselves,” Liu said. “Now I have a lot of time to read my favorite books, to make friends, to do the things I want to do.”

Though universities offer a welcomed change from high school education, China may not be ready to fully embrace the concept of liberal arts education, especially at a school as experimental as Xing Wei.

A private institution, it has high tuition and much less prestige than public Chinese universities, which are government funded. Xing Wei tuition is about $40,000 per year including room and board, in comparison to the average tuition of a Chinese university, which can run from about $2,000 to $4,000 per year. Chen said that many Xing Wei students receive financial aid from donors.

If the hefty price does not steer students away, there is also the reality that China is producing more college graduates than its economy can absorb. While many reformers agree that China could use more innovative, critical thinkers, it would be difficult for a graduate from a non-accredited liberal arts institution to easily find a job, Zletz said.

Xiong of Fudan similarly doubts the viability of Xing Wei.

“From our experience, especially during the initial years when we promoted liberal arts education at Fudan, we met a lot of opposition from parents,” Xiong said. “They don’t think their children can get a job in the labor market if we focus too much on the liberal arts.”

On the other hand, said Xiong, China has more than one billion people — some of whom may be willing to take a big risk. And that is exactly what Chen is banking on.

Chen said he knows his college is not for everyone, and that’s the way he wants it. Ideally he would like to enroll 1,000 of the “right kinds of students” who want to “follow their own judgment.”

“For me, I’m glad we’re doing this [at Xing Wei],” Chen said. “We’ll be a gathering ground for people who don’t want to follow someone else’s success path.”