Jason Olcese is best known around State College as the lead singer of My Hero Zero, a cover band that performs at local bars throughout the week.

He joined My Hero Zero a few years ago after the band lost their lead singer to a national tour. Olcese auditioned for the band and although it was apparent that some work needed to be done, they saw something in him and were confident they could turn him into a lead singer, Olcese said. They were right.

Before he joined My Hero Zero, Olcese says he was used to sitting on stools in small cafes and hiding behind his guitar, using it as a “protective shield.” He took hip-hop dance classes to get more comfortable in his body and develop himself into a more interactive lead singer. 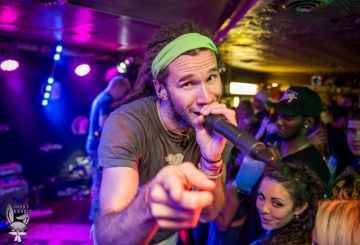 Olcese is known for engaging the crowd with his high energy. He’s rarely standing in one place for very long. He likes to dance his way to the front of the stage and get the audience involved, which isn’t something that came naturally to him.

Olcese likes to engage the crowd off the stage as well. He says he is very interested in his fans and makes it a point to get to know the people who come out to support him. His fan pleasing down-to-earth nature is what keeps people coming back, says Penn State senior Sydney Mitton.

Aside from playing shows with My Hero Zero along the east coast, Olcese tours independently as “Jason O.” He writes original songs, which is how he got involved in music to begin with. He says that sharing his personal experiences with people is important.

One thing fans might not know about Olcese (or wish they didn’t) is that he’s married. Cue the heartbreaks.

While he loves the chaos that comes along with performing, he says he enjoys relaxing at home just as much. When he’s not working on music he loves to cook, do yoga and is heavily involved in an intense fitness program called cross-fit.

Though Olcese loves performing with My Hero Zero and credits them with changing many aspects of himself as a entertainer and as a person in general, he believes there will come a time where he parts ways with the band to move onto the next chapter of his career as a solo artist.

Olcese uses an interesting technique to make his own music

In addition to singing he plays the guitar, bass, drums, percussion, piano, harmonica, ukulele, and trumpet. Sometimes all together!

Visit www.myherozerolive.com to learn more about the band.

My name is Kelsey Lukas, I’m from Collegeville, Pennsylvania. I am currently a broadcast journalism student at Penn State. I plan to graduate this summer after completing an internship with MoreHouse records.