Ryan Breton: Weatherman in the making

Ryan Breton, a junior at Penn State, started thinking about being a meteorologist during middle school in 2006.

He grew up in New England, a region known for its crippling blizzards and harsh winters. In the seventh grade, Breton created a website entitled AtkinsonWeather.com, a site where he frequently posted forecasts for the weather in his local hometown of Atkinson, New Hampshire. In addition to forecasts, Breton posted blogs, weather news and information of weather events not only in New England but also throughout the United States. As a young kid, Breton remembers spending several hours at a time skiing and participating in outdoor activities. 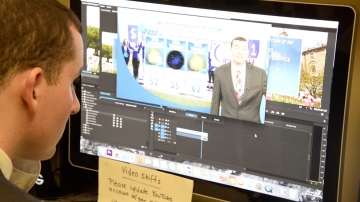 As he grew older his passion for meteorology expanded. In high school, Breton was known as the weatherman, where he updated school officials on the weather during the winter. He admits that his analysis and knowledge of the weather played a huge role on whether or not his principal cancelled school or not. As senior year approached, Breton knew he wanted to attend Penn State, citing that he was “impressed by its reputation as one of the best meteorology schools in the nation.” Breton’s meteorology career would flourish upon stepping foot on campus in State College.

During his first year on campus, Breton became heavily involved with in student council, where he became vice president of the undergraduate student council for the College of Earth and Mineral Sciences. In addition to this, Breton was a producer and co-host of “Up in the Air,” a weekly 15-minute broadcast focusing on weather and climate issues in the world. After his freshman year, Breton received the opportunity to be a summer meteorology intern for WCVB in Boston where he assisted in preparing forecasts and graphics for the 12 p.m., 5.p.m., and 6 p.m. weekday newscasts. Breton would return to WCVB during breaks to assist the stations meteorology department.

During his junior year, Breton was invited by his high school to speak at a Ted conference about his career as a meteorologist at Penn State. He calls this moment a ‘dream come true’ due to the fact that he was able to speak in front of friends and family in his hometown. During his junior year, Breton was named President of the Penn State campus weather service, where he oversees the nation’s largest-run weather organization. In addition to this, Breton appears on air in weekly broadcasts for C-Net, which serves Central Pennsylvania. As senior year approaches, Breton hopes to land a position as a meteorologist in New England at WCVB where he interned for two summers.

Ryan Breton: Up, Bright and Early

Every Monday and Wednesday at 6 A.M. Ryan Breton along with other members at Campus Weather Service wakes up to create forecasts which is then broadcasted on C-Net to be broadcasted to the residents of Centre County. He has down this for three years here at Penn State and has reiterated the importance of reaching to the station early to ensure that each and every forecast are accurate and ready to go by 6:30 every morning.

Kevin L. France is a junior, majoring in Broadcast Journalism with a minor in Kinesiology. He is from Brooklyn, New York and is currently an active member in COMRADIO. He aspires to work for ESPN as a sports analyst or work as a beat writer for the Brooklyn Nets. His favorite teams are The New York Mets and Brooklyn Nets. To Contact him, email .(JavaScript must be enabled to view this email address) and follow his twitter @kev_da_bossman.

A Game of Skill, Endurance, and Camaraderie.