Four years ago Becky Vivian and her husband, Hut, took their son, Eli, to the doctor’s office after a week or so of complaints from him. The doctors ran tests.

In September 2012, the Vivians learned that their son, Eli, has a life-threatening genetic disease. Eli was diagnosed with Metachromatic Leukodystrophy. The disease causes progressive deterioration of intellectual functions and motor skills, including the ability to walk.

“We were devastated,” Becky said after learning that her athletic son would lose his ability to play baseball. 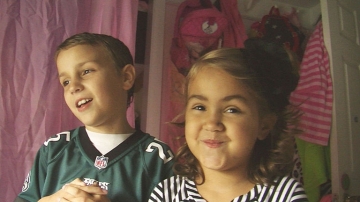 Eli (left) and Ella (right) Vivian discuss what they want to buy at Hobby Hut. Photo by Grace McCallus.

Two weeks after Eli’s diagnosis, the Vivians had their four other children tested for MLD. Eric and Evan Vivian, the oldest boys, turned out to be carriers of the disease. Their youngest daughter, Ella,  wound up in the same boat as her brother, Eli.

The Vivians moved fast in their search for treatment. After intense research, they found only a bone marrow treatment, with a mortality rate of 50 percent. The treatment the children would receive came from a tip from someone on Facebook. The tip lead to what would become a four-year journey to Milan, Italy for genetic testing treatment.

Becky and her mother-in-law visit Italy every six months with Eli and Ella for treatment. Their first trip lasted ten months. Becky says this will be their routine for at least a couple of years.

"Since day one of diagnosis almost four years ago, our whole life changed," Vivian said.

The disease effects Eli and Ella's moods as well as their physical health. They get frustrated because tasks that used to come naturally are now difficult. Eli's physical health has deteriorated more rapidly than Ella's. His legs hurt, which causes him to have trouble walking.

"I feel like they don't know themselves. They know they have MLD, but they don't really understand what it does to their body," Vivian said.

"We are optimistically hopeful," she said.

Video: The Parental Takeaways from MLD-Diagnosis

Becky Vivian says she had a bad feeling when she saw her son, Eli, struggling to hop in a potato-sack race at field day four years ago.

“If you can just live everyday to the fullest I think that’s the best thing we can learn from something like this,” Vivian said.

I am interested in entering the field of radio or television broadcast as an on air talent or as a member of a programming/production department. My preferred focus would be in the entertainment or music industry.

Together, are we one?