UNIVERSITY PARK -- Jake Finelli graduated with a major in Ecology from Penn State in 2014, but his interest did not stop there.

Today, Finelli has an internship with the Penn State Arborists, the organization that takes care of the tree trimming on campus. Their main priority is taking care of the elm and oak trees that are located at the school.

“It’s kind of like a fine art," he said. "Basically you’re working to create a landscape but you’re using a really large tree and it’s over a long period of time. So it’s not instant.”

Some of the day-to-day assignments that the trimming crews are tasked with include basic pruning, structural pruning, the removal of deadwood from inside trees, wood chipping, and even the take-downs of the massive trees that tower over the campus.

Basic trimming is the removal of excessive or unsightly branches that are groomed to maintain beautiful tree aesthetics.

Structural pruning focuses on shaping younger trees to grow upright in a healthy manner. Also, any limbs of trees that are deemed a hazard to students or surrounding power lines must be removed.

Plenty of heavy duty equipment is used, including chainsaws, handsaws, rope-pulley systems and massive truck-drawn wood chippers that spit out pounds of disintegrated wood. This chipped wood is sent to Farm Ten, where the wood can then be used to spread on landscapes and flowerbeds or to make furniture.

Finelli says the typical tree trimming crew has a team of around a half dozen people, who all work different parts of the process. This expedites the procedure; speed is important because the crew must close off any area where they are working.

Roping off an area can affect the traffic of students walking around campus, so the arborists work quickly in order to minimize this issue.

There is an element of danger. Finelli says that many of his co-workers have been injured, including himself. Special precautions must be taken when any member of the crew goes up into a tree. A complex rope and pulley system ensures that the climber has different points of support and ways to get down in an emergency. 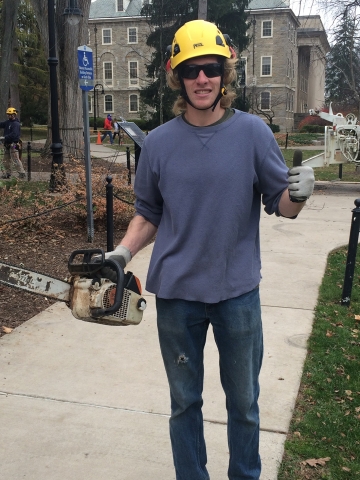 Jake Finelli works with the Penn State Arborists to trim many different trees around campus including oaks, elms and even redwoods. These trees contribute to the overall atmosphere at University Park, and the arborists make sure that the campus remains a safe and beautiful place. (Photo by Sullivan Holt)

Finelli stresses just how important arbor culture is to Penn State as a whole.

“Without the arborists that work here, Penn State’s campus would be completely different. Most of these elms wouldn’t exist without the routine maintenance that happens every year.”

Penn State has been dealing with the fungal disease spread by the Elm bark beetle for over fifty years.Trees are sprayed in the spring with pesticides to combat the growing problem of infectious diseases and harmful insects. One significant problem the trees face here at University Park is Dutch elm disease.

“If you look around Penn State’s campus, a lot of people don’t realize that they are walking past some of the last American elm groves in the world because they are wiped out by Dutch elm disease."

In the spring, the Arborist crews must physically inject the trees around campus with a large syringe. The roots are injected with a form of medication that the tree then uptakes into its system. The beetles that cause this disease then die if they attempt to eat any part of the tree.

The Office of Physical Plant that coordinates the tree trimming crews has to keep track of many trees. According to OPP there are over 14,000 trees at Penn State that require maintenance.

“It’s something that I definitely think is going to be a lifelong hobby of mine. I will definitely keep training and developing new techniques.”

The Penn State Arborists reuse a large portion of the wood that is collected from trimmed or felled trees. Chipped pieces of wood are used on landscapes and flowerbeds around campus. Larger pieces of more desirable wood such as elm or walnut are used to make furniture through a project called the Penn State Elms Collection.

My name is Sullivan Holt and I am currently a senior at The Pennsylvania State University. I am focusing in Broadcast Journalism with a minor in History, and I expect to graduate in May of 2016. During the last three years at Penn State I have worked at multiple jobs in differing industries. The summer of my junior year I worked as Production Intern at WMUR-TV in Manchester, NH. This gave me valuable broadcast experience, and pushed me to join the PSNtv News Production team when I returned for my junior year. Most recently, I worked as a Salesforce Administrator at Top Tier Connections, Inc. where I learned numerous effective business tactics, programs, and practices. After college I would love to attain a job in advertising, before making my way to the entertainment and film industry.