Logos are everywhere. They saturate society on a daily basis, from the design on a Poland Spring bottle to the cover of Vogue. Ever stop to think who creates these tiny works of art?

Kailyn Moore, a senior majoring in graphic design, is happy that no one does, because she prefers that her artwork remain anonymous. Which is why, out of a sea of 40,000 students, only a few could point her out as the creator of the 2014 Homecoming logo and the 2015 THON logo. 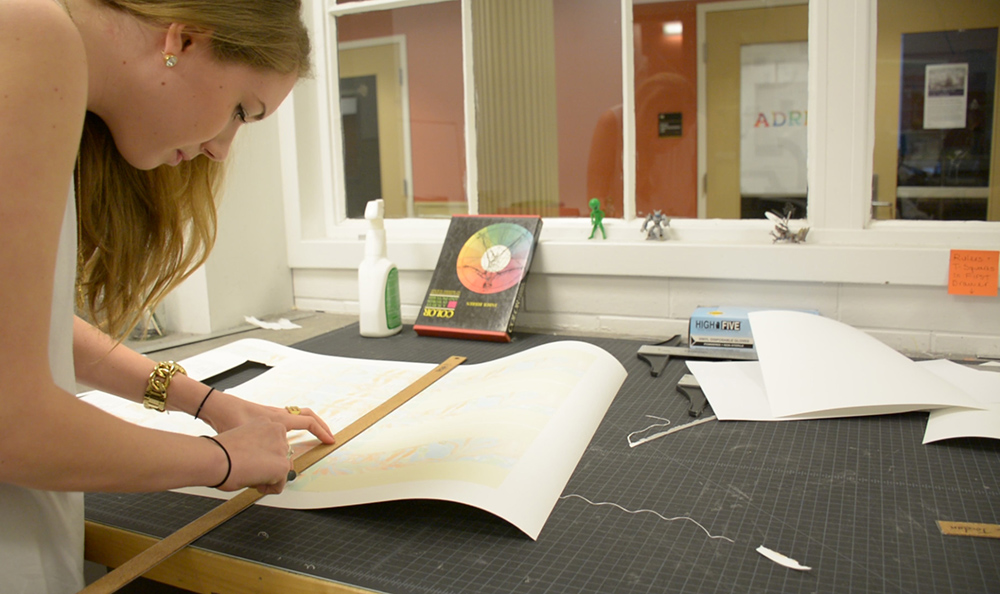 Moore cuts together a mock-up of a body cosmetic line she designed titled, "Clean Canvas." Photo by Zoe Shwidock

After Moore realized her passion for charcoal drawing wouldn’t sustain a career, she discovered the graphic design major, which combines her love of art with the ability to make a positive impact in the world. But because the major is so competitive, prospective Penn State students must apply and be admitted prior to attending the university in the fall. Moore, who came to this realization at her FTCAP (The First-Year Testing, Consulting and Advising Program), had missed the deadline.  “I said take me to whoever I have to go to. It can’t be too late, I haven’t even started school!” Moore said.

Once she was admitted, Moore realized that there were plenty of aspects to graphic design she hadn’t expected. “I got myself into this program and looking back I had no idea what I was getting myself into. But I guess it was fate.” Moore said.

The program may have posed many challenges for Moore, forcing her to grow as a designer and think outside of the box, and with graduation on the horizon, four years seems to have flown by. Nevertheless, Moore will leave Penn State undoubtedly knowing she left her mark.

But nothing in this field comes without criticism. After the release of the homecoming logo, a publication produced a story titled, “Homecoming Logo Designer Still Drunk When Submitting Final Submission.” Upon reading the article, Moore said she wasn’t devastated. “If people only always said ‘good job,’ then where is there room to grow?” In the field of graphic design, Moore said, it’s imperative to have a tough skin. But in the end, any exposure is great exposure.

The concept of the THON logo stems from her vision of the image being realistic but playful, which inspired Moore to build on the idea of the painting of the moon. Walking down the street and seeing people wearing her work, Moore says, is a “cool experience in itself.” She describes her design being chosen as the THON 2015 logo as surreal, knowing she’ll forever be etched in Penn State history, even if her signature is never etched under her work.

Graphic designers are often proud of the war wounds they acquire after going to battle with sharp tools on the cutting table. Moore describes what it is like to lose a finger in the process.

After graduation, Zoe is moving to Thailand to fulfill her dream of working for Documentary Arts Asia, a documentary photography non-profit that focuses on capturing Asian social issues.