The Mr. and Mrs. THON Pageant is a fundraiser benefitting the Penn State Dance Marathon. One man and woman pair together from each of the 16 committees to compete in the pageant.

Jackie Stumm, a THON Captain representing the Communications committee, says she tries her best to be as involved as possible with THON.  She never thought about representing THON as Mrs. Communications. The Penn State senior says this fundraiser brings people together to fight for children with cancer.

“I would do it again, like, in a heartbeat. I think all in all, this pageant was like best thing to happen to me so far this semester,” she said.

The 32 contestants started rehearsing a month before the event. The Pageant took place in Schwab Auditorium on November 19. The pageant included a question and answer segment, musical chairs, a newlywed game, and of course, the talent segment.

Stumm says the talent segment was the hardest part when preparing for the show. 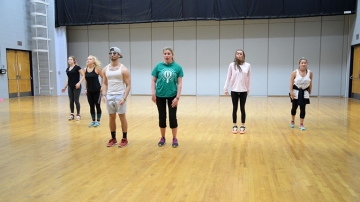 Jackie Stumm and David Candito rehearse their hip-hop dance for the Mr. and Mrs. THON Pageant. Photo by Christine Rienzo

She and David Candito (Mr. Communications) created a dance to the songs “Barbie” by Aqua and “Sorry” by Justin Bieber. She never imagined herself performing a hip-hop dance in front of a crowd of 900 people.

“We actually don’t really have a talent that’s specific to us. So we kind of thought outside of the box and asked our friend Allie who’s on whiplash to help us choreograph a dance," Stumm said.

The duo worked for three weeks with Allie Braconnier to perfect their dance. The pair also got backup dancers from the well-known dance group to enrich their performance. Stumm says she had never performed on stage before and had no idea what to expect. The couple struggled with memorizing their routine and had trouble executing an elaborate flip at the very end of their routine.

Stumm started off preparing for the event with a different co-captain, but because of scheduling conflicts, Candito volunteered to do the job. With 3 weeks to get everything together for the show, Stumm and Candito met every other day to rehearse and get their dance routine fully memorized. Stumm says having Candito as her counterpart made her less stressed and more positive about their performance.

“David was really good with picking up my spirits and his positive attitude like brought me back and remembered that it was really for fun why we were doing this,” Stumm said.

Although Mr. and Mrs. Communications did not place in the pageant, it was an experience Stumm says she will never forget. The most important thing she realized was to have fun.

The Mr. and Mrs. Public Relations Committee won the pageant. For their talent segment, they performed a skit based on Saturday Night Live’s “Weekend Update”. Other acts involved a parody of Adele’s “Hello," a ballet dance routine, and a “Riff-off” based on the movie “Pitch Perfect."