Drew Danuski is a State College radio personality with Magnum Broadcasting. Danuski spends a lot of time on the job, working a full 40-hour week and sometimes on weekends. Danuski is a certified announcer in the state of Pennsylvania, traveling to Mixed Martial Arts (MMA) fights in Altoona, Pittsburgh, and other surounding cities. 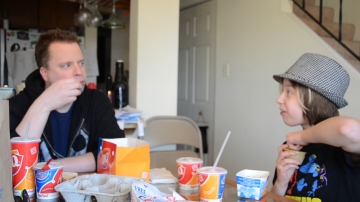 Danuski is also the single father of a 12-year-old named Angelina. “We aren’t the typical family,” says Danuski. Their relationship has always been quite unique. They share a lot of the same interests, including rock music and comic books. They spend most weekends together going to concerts, comic book conventions, or just spending quality time at home. The two live in a cozy town home in a residential area of State College close to Penn State’s campus. Danuski is originally from Warren, PA, which is a much smaller town than State College, so moving to State College less than 10 years ago and getting full custody of Lina just 5 years ago has been a big change for him.

Danuski said he loves being a father, but it's not the easiest job. “Being a single parent alone can be very stressful, so being a single father of a young girl can sometimes be difficult since there is a lack of a female role-model.” Although there are more single mothers than fathers, there are still 2.6 million single fathers today. (Pew Research Center) Danuski says he is very dedicated to giving Lina a unique and special upbringing. He was radiant with glee and satisfaction when he spoke of her. They often refer to their relationship as “two against the world,” because their bond is just that strong.

Drew Danuski is a full-time employee taking on many different titles and tasks at Magnum Broadcasting. He hosts Qwik Rock radio station which features all rock music. He also does a lot of the logistics at the station. Danuski is also the father of Angelina Danuski, another job he is very dedicated too.