AxD or Argenzio x Deroiste started out as an electronic dance music and DJ group in college. They are known for their energetic performances and heavy trap EDM (Electronic Dance Music) sounds. Recently, the DJ duo has performed with Dej Loaf and Big Gigantic. They are getting more shows with well known artists in the EDM genre. 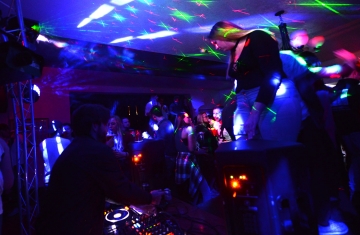 AxD started with Vincent Argenzio, a senior at Penn State. [UPDATE: AxD has signed with a record label and AxD changed their name to Statik.]

“When I was younger I was mainly into rock music and started playing in rock bands,” Argenzio said.

As he went through high school, big EDM artists such as Skrillex started to emerge in the scene. Argenzio said he enjoyed the hard dubstep sound that came from this music genre and incorporates it in his songs.

When he got to college, he started to DJ and performed at frat houses. He eventually started performing for bigger artists such as Carnage and more.

Deroiste was another student DJ who Argenzio connected with through his shows, they eventually joined together to create the DJ group, AxD.

After AxD came into picture, they started contacting artists through Sound Cloud and making EDM tracks.

“Mainly I like to call it a combination of hip hop and dubstep,” said Argenzio when he spoke about AxD’s music style.

“When we first started out we messed around with a lot of different genres and we found what we like to do,” Deroiste said.

They describe their style as heavy trap music and it’s the genre that they continue to work on. They hope to release a rap track with Lit Lords called “Blow Up,” they have also created a hit track called Instagram Models.

Their inspiration comes from artists such as Skrillex and Yellow Claw.

“The music that we’re creating now is about coming up in the industry that’s very competitive and it’s difficult to cut through,” said Argenzio.

“The content that we’re trying to engage the audience with is reflective of our experience so far and kind of making a statement that when we come out this is who we are,” he said.

One of the keys to their success is to keep working with bigger artists and building connections Argenzio said.

“Once you get through the first couple shows you realize, everyone’s really cool, you can hang out with them and talk about music,” he said.

“And there’s that really supportive, strong EDM community because the bigger guys have been where I’ve been at this point. So they’re very supportive and welcoming," Argenzio said.

As AxD’s name gets bigger their crowd has also grown. At the Dej Loaf show Argenzio said it was exciting to see the crowd grow as they started to play their music.

“It’s not nerve-wracking it’s more exciting just to get to meet more people. Network more for the producer, get our little family of producers, DJs, and artists and working together with each other,” Argenzio said.

AxD is working to release a couple new songs their record label within the next six months. Once they get positive responses from these tracks they hope to do more shows and increase their popularity Argenzio said.

Video: An Inside Look


A preview of an upcoming performance and their upcoming track Instagram Models.

Capturing music has always been a passion of mine. When I’m recording video I prefer to document musicians playing original music to showcase their talent. To me, each band has a different style and persona that needs to be captured. I have spent my time working with an EDM artist (Statik) and various local alternative bands in the State College music scene.

Dancing with the R.A.M. Squad at Penn State

A Taste of Café Laura