Some students fill their free time watching Netflix, while others spend it napping. Not Nick Brooks. He spends his spare time chopping, splitting and sawing wood for the love of being a woodsman.

Brooks is the president and captain of the Penn State Woodsman team and is devoted to his newly adopted craft. While at first look Brooks appears to be a seasoned veteran of the sport, in reality he has only been competing for a little over a year. He says he was first attracted to the sport by watching shows like Axe Men on television and when he meet someone who was on the team he had to give it a try.

“It’s been an outlet.” Brooks said. “ It keeps you on a schedule [and] a routine, similar to high school sports.”

The Senior Forestry major says he was quickly drawn in by the physicality of lumberjack sports.

“It’s like a workout, but you are doing something, you are not just in the gym lifting a weight and then walking away, “ said Brooks. “This you chop a block and when you are done there is two blocks, you have finished something you have started and it is just satisfying when you get good at something that you can do.” 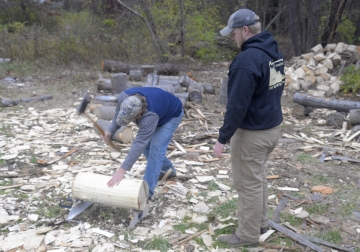 Brooks assists a teammate setting up a block to practice the overhand chop. (Photo by Trey Cochran)

Not only is Brooks a fierce competitor, he also is an excellent teacher and is always helping his fellow teammates develop their skills and techniques. In his short time with the club he has established life-long friends.

“I see these people almost every day through classes or walking around campus,” Brooks said. “My roommates were on the team last year, I had no idea who they were before last year. I meet them on the team and then we just started hanging out outside of practice.”

What will miss the most about the sport when he graduates in the spring? Without missing a beat Brooks said, “the people.”

It is crucial that the team takes care of all of their equipment to not only perform better in competition, but to stay safe says Brooks. While they sharpen their own chainsaws they send out their saws to the manufacturer to be sharpened every year or so. As for the axes, those are sent to Nick Kramer who is a local sharpener who serves as a sponsor to the team by giving them discounts on sharpenings.  While sharpening their tools is important, doing the minor things day in and day out is just as crucial. “We always keep the saws and axes oiled because they are cutting wood and there is moisture in [wood and [saws and axes] are just steel and they could rust.” Brooks said. We “always return them to the box when we are done using them.”

Saturdays are for skateboarding

Simply Untouchable: The King of the Wrestling Ring